As the Las Vegas Track Club shifted gears in 2017 by going from a member-based club to a donor-based organization one of first things that happened was that the Scholarship Program, which has been the backbone of the club since the millennium (it was put into place in 2000), is no longer closed to non card-carrying members. It made sense initially to limit scholarships to LVTC members. It was benefit of membership. It encouraged those who would be applying for a scholarship to be involved with the club: run our races, volunteer to help at events, attend social functions, etc., since the Scholarship Committee took into account “LVTC involvement.” It was a case of looking after your own: “Only members need apply.”

As Scholarship Chair I was OK with that, but it always bothered me a little. As a 501c3 organization, which the Las Vegas Track Club was, and still is, it seemed to go against the idea of inclusion. We were giving money to support our charter, but we weren’t reaching out to the full community, in this case high school seniors who were runners and were headed off to college. By being exclusive to members, quite frankly, we weren’t always giving that financial boost to the “best qualified.” Usually, money was given to all who applied. Great for them, but something seemed amiss. It didn’t seem right that all you had to do was pay your dues and you could claim your prize. Well, now that’s changed.

Now any high school senior in southern Nevada is eligible. Otherwise the rules haven’t changed. It’s still a three-legged stool. We still weigh (1) academics; (2) athletics, with an emphasis on high school cross country and track, and youth running; and (3) citizenship. We do not take into account “financial need” per se, but it can be a consideration, along with other things like physical disabilities and other hardships. These “other things” can be brought out in the essay or the letters of recommendation.

We have tried to make the application package as compact as possible: cover letter, resume’, academic transcript, a short essay, and two letters of recommendation. (For an athletic resume, I go to athletic.net and add those findings to the package.)

I hope you flood me with applications this year! We are, as best as I can determine, the only game in town. Who else is offering scholarship money to graduating high school seniors who are runners? We will be looking for a final pool of candidates of up to 12 and will likely give away up to $15,000, with a grant range of $1000 to $3000. No strings attached. The money is given in the form of check that is to be used in support of continuing education.

Deadline for applying is April 5th. Go for it.

History:
The Las Vegas Track Club (LVTC) Scholarship Program was officially established in 2000 to assist local high school graduates with college expenses.  The program is funded by donations from club members, local organizations and individuals, and the fundraising efforts of the LVTC.  The club designates at least one club-sponsored event per quarter as a Scholarship Race.

Purpose:
the Las Vegas Track Club Scholarship Program is a way of giving back to the Community to help foster interest in running and show our commitment to youth running in particular.  By supporting young people who have demonstrated academic and athletic excellence, community involvement, and a strong interest in running, we are encouraging healthy, productive, and disciplined lifestyles in these young adults who are the leaders of the future.

Award Amounts:
Variable: may be given to a single individual or divided among multiple recipients at the discretion of the Scholarship Committee and, ultimately, the LVTC Board of Directors.  Awards can be expected to range from $1,000 to $3,000.  In 2016 a total of $15,000 was distributed among nine (9) finalists.

Eligibility:
Any graduating high school student (Class of 2017) from southern Nevada (currently defined as Clark County, Nye County and Lincoln County) may apply.  NOTE: Active membership in the LVTC is no longer a requirement.

Selection Criteria:
Scholarships are based upon achievements during the student’s high school career in the following areas: (1) academics, as measured by high school grade point averages (GPA), both un-weighted and weighted (if applicable), and SAT/ACT test scores; (2) athletics, with emphasis on cross country and track & field and participation in youth running; (3) extracurricular activities and community involvement; (4) a personal essay; (5) two letters of recommendation.

Weighting between these areas will be determined by the sole discretionary judgment of the Scholarship Committee and the LVTC Board of Directors, whose decisions will be final.

Use of Funds and Distribution:
The award is intended for the use of the recipient in the pursuit of post-secondary education; money will be awarded to the winner or winners in the form of a one-time, single cash grant.

Application Deadline and Notification of Award Selection:
Applications must be submitted to the Committee (see address below) and received no later than Wednesday, April 5, 2017.  Applications are available on-line at www.LVTC.org (the LVTC web site) or through the mail by sending a self-addressed, stamped envelope with an application request to:
Attention: Scholarship Committee
Las Vegas Track Club
P. O. Box 30134
Las Vegas, NV  89173-0134

Applicants will be notified no later than May 10, 2017, regarding the results of the selection process.

This flat, out-and-back course runs on a paved trail with desert/mountain views. The park itself is a bit hidden because it is located behind the Wetlands Park with access from the North only. The easiest way to get there is to go east on Vegas Valley or Sahara, turn south on Hollywood, and take Hollywood until the road ends (the park is on the right). Google maps makes it look like Hollywood continues, but the road actually ends right at the park.
LVTC events are open to all runners; sign up starts about a half hour before the race. The race fee is $3 for members, $5 for non-members. Students 19 and under receive a $1 discount. In an effort to encourage young runners to join us, the LVTC does not charge for runners 10 years of age or younger.

All participants will receive a LPA t-shirt.

Prizes will be awarded to top finishers in each age group.

Ready for some Thanksgiving fun?

Get those turkey tail feathers and pilgrim’s hats on and come on out for our second annual Thanksgiving day run!

The event will start at 8:00 am right behind the PKWY Tavern on the Western Beltway Trail, which parallels the 215.

The participants will head west on the Western Beltway Trail, enjoying awesome views of the mountains, for 3.1 miles or 1.55 miles, and then will turnaround and enjoy downhill and spectacular views of the strip all the way back to the finish line!

All participants will receive a really cool tech shirt and awesome finisher’s medal!

‘After Race Celebration’ inside the PKWY Tavern…only $1 for your first beer!

Come on out and enjoy music, food and lots of fun for a Happy Thanksgiving to all!!!

Keep Memory Alive (KMA) raises awareness and funds in support of the Cleveland Clinic Lou Ruvo Center for Brain Health’s work towards enhanced treatments and research of neurocognitive disorders. These include ALS, Alzheimer’s, Huntington’s and Parkinson’s disease, Multiple Sclerosis and memory disorders of all kinds. Memory disorders don’t simply affect an individual, so they provide programs and services for the entire family of caregivers.

Join us for a low key 6K & 2M at Bruce Trent Park. The course is out-and-back and begins and ends with a loop around the perimeter of the park before joining the smooth, paved asphalt trail that runs southeast from Bruce Trent Park toward Kellogg-Zaher Park. We’ll run around the park clockwise at the start, then finish running counterclockwise to complete the out-and back course.

LVTC events are open to all runners; sign up starts about a half hour before the race.  The race fee is $5 for members, $10 for non-members.  Almost all races are separated into sex and age categories, with ribbons awarded to the top five finishers in each division.  In an effort to encourage young runners to join us, the LVTC does not charge for runners 10 years of age or younger.

Join us for a 5K/2M at a new venue! The Tropicana Flamingo Wash Trail is a smooth ribbon of asphalt that runs from the southwest corner of Durango HS to S. Durango Dr. parallel to W.Hacienda Ave. This event will take place on Saturday, July 26, 2014, at 7am. Please plan on parking in the southwestern corner of Durango High School.  We’ll gather there, then mosey over to the trail when we’re ready to race.
LVTC events are open to all runners; sign up starts about a half hour before the race. The race fee for Low Key Races is $5 for members, $10 for non-members.

Join us for a low-key 4M/2M race at Kellogg-Zaher Park at 7am! The race will be run along a traffic-free paved pathway located in a large soccer park in Summerlin. Look for registration at picnic tables in the Northeast corner of the park. We hope to see you there!

LVTC events are open to all runners; sign up starts about a half hour before the race. The race fee is now $5 for members, $10 for non-members. Students 19 and under receive a $1 discount. Almost all races are separated into sex and age categories, with ribbons awarded to the top five finishers in each division. In an effort to encourage young runners to join us, the LVTC does not charge for runners 10 years of age or younger.

You Are Invited to make your nomination(s) for…

Just a reminder that it is now time to make your nomination(s) for the upcoming election.

Please nominate someone or even yourself.

Nominations must be made by midnight, May 21.

Please send your nominations to the Election Committee Chairman, Paul Buck, at

Include an e-mail address for each nominee so they can be contacted to verify their willingness to run.

You are cordially invited to join us as we announce the 2017 Scholarship Winners, Legends, and Gran Prix Winners.

All Gran Prix participants with 70 or more points will win an award.  Click here to see the latest standings. 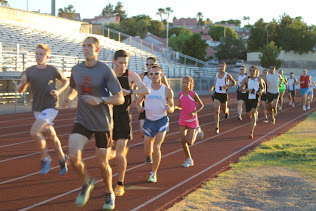 Join us for a Las Vegas Track Club tradition. The Summer Track Series! Begins at 7:00 p.m. and is $1 for all participants. Water will be provided, and times will be recorded. See you there.